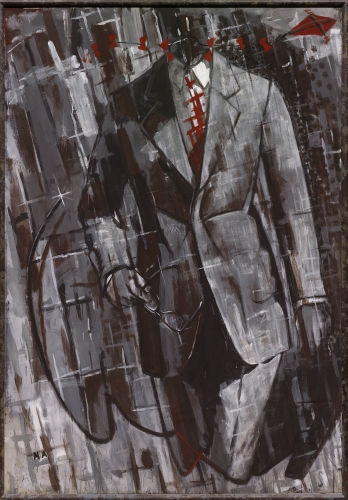 Michael Werner Gallery is pleased to present Players Ball, an exhibition of works by Markus Lüpertz selected by Peter Doig. Players Ball explores Lüpertz's fifty-year pursuit of painting with a focus on works of the 1960s and 1970s juxtaposed with a group of new paintings and sculptures. Players Ball is Lüpertz's first solo exhibition in London in over twenty-five years.

Markus Lüpertz is a highly prolific painter and sculptor as well as an accomplished poet and critical writer - a modern "Renaissance man" who, though firmly grounded in tradition, strives for renewal in his every creative act. His insistence on the primacy of painting, steeped as it is in materiality, feeling, narrative and history, forms a complicated artistic worldview which is often (and all too easily) discredited within the contexts of postmodernism and the persistent theory-heavy dialogue surrounding contemporary art. Lüpertz's position is further complicated by his unabashed appreciation for classicism and his frequent exploration of figuration. Consequently and despite his numerous creative achievements, Lüpertz has been largely misunderstood, at times flatly ignored, by the critical mainstream. Players Ball seeks to redress the oversight, to reshape our understanding of Lüpertz's endeavor and draw our attention to his thoroughly modern sensibility.

Since the emergence of his first mature paintings in the mid-1960s, Lüpertz stands as a polarizing figure, an uncompromising artist who consistently ignores the proscriptions of the zeitgeist to form his own way forward. The works in Players Ball were selected by renowned painter Peter Doig to showcase the astounding depth of Lüpertz's stylistic reinvention in painting. Doig's approach to Lüpertz is highly personalized, the connection between them deeply felt. Both artists see the concept of the motif as an essential element in their practice and both share an intense interest in the intersection of abstraction and figuration.

Included in Players Ball are several of Lüpertz's "dithyrambic" paintings from the 1960s. These depictions of tents, sailboats, footballs and other colorful artifacts of contemporary life addressed "pop" in a decidedly un-mechanical, painterly manner, balancing painterly feeling with visual clarity. Lüpertz continued to expand the expressive possibilities for painting in his "German Motif" works of the 1970s. His dramatic images of weapons and fragmented landscapes tackled major themes of post-war German identity at a time when many artists were retreating into conceptualist gamesmanship or minimalist formalism. Still later, while his contemporaries preoccupied themselves with a then-emerging postmodernism, Lüpertz employed painting to reexamine the importance of narrative, turning to literary and overtly classical themes. Players Ball clearly illustrates that Lüpertz desires no claim on any one stylistic approach, remains always free to re-imagine major stylistic conventions of modern art; this is perhaps the artist's greatest achievement.

Markus Lüpertz was born in 1941 in Liberec, Bohemia, in the current Czech Republic, and emigrated to West Germany at the age of seven. As a teenager he worked for one year in a coal mine and later earned a living building roads. Largely self-taught, he studied briefly at the academies in Krefeld and Düsseldorf before moving to Berlin in 1962. There, in 1964, Lüpertz co-founded Galerie Grossgörschen 35, an artist-run cooperative where he presented his first solo exhibition of paintings. Lüpertz has gone on to exhibit his work throughout Germany and Europe and is the recipient of numerous awards, including the Villa Romana prize; the German Critics Association Prize; and the Julio González prize. Lüpertz served as director of Kunstakademie Düsseldorf from 1987 to 2009. Major solo museum exhibitions include Stedelijk Museum, Amsterdam; Kunstsammlung Nordhein-Westfalen, Düsseldorf; IVAM Centro Julio González, Valencia; Kunstmuseum Bonn; Museo Nacional Centro de Arte Reina Sofia, Madrid; Museum Ludwig, Cologne; and Gemeentemuseum, The Hague. The most comprehensive retrospective of the artist's work was organized in 2009 by the Kunst- und Austellungshalle der Bundesrepublik Deutschland, Bonn. Markus Lüpertz lives and works in Düsseldorf and Karlsruhe, Germany.

Players Ball is on view at Michael Werner Gallery in London from 30 January through 15 March 2014. The exhibition is accompanied by a fully illustrated catalogue featuring a transcription of Markus Lüpertz in conversation with Peter Doig. Gallery hours are Tuesday through Saturday, 10AM to 6PM. For more information please email press@michaelwerner.com