From the beginning of time, humans have desired to see themselves reflected in art. The human figure was rendered on cave walls and carved into stones to be carried as totems or idols. Artists, from antiquity to now, have expanded on these early impulses and used the human figure to portray all facets of the human condition. Born in different eras, Arp, A.R. Penck, and David draw on this long history and use the human figure to examine movement, sensuality, and power.

Arp, an early 20th century modern master, migrated between France, Germany, and Switzerland, fleeing two world wars fought between two countries that he called home. A.R. Penck, one of the most important post-war German artists, fled persecution from the authoritarian East German government. David, an Italian artist living and working in London today, has made new work for this exhibition while in quarantine in Berlin. The artists’ migration between countries, and the unstable conditions that caused it, is reflected in the artists’ renderings of the human figure. 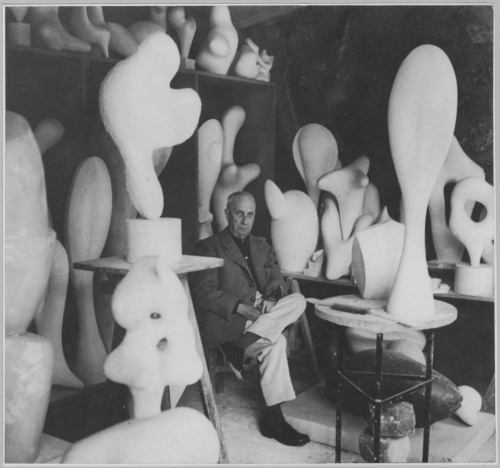 Jean Arp was born in 1886 in Strasbourg, a city on the border of Germany and France. He studied in Paris and worked in Munich prior to the start of World War I. When he moved to Zurich to take advantage of Swiss neutrality, Arp became a founding member of Dada, an art movement that believed in natural and irrational order over reason. Through his affiliation with Dada, Arp experimented with chance. Arp was a talented painter and poet, but he is most remembered for his biomorphic sculptures. Chance plays a part in his sculpting process. Arp never started a sculpture with a shape in mind. Instead he allowed intuition to guide him through the sculpting process, creating sensual, biomorphic forms full of movement that are often seen as figurative, playing on the primal desire to see ourselves reflected in art. Jean Arp died in Basel in 1966. 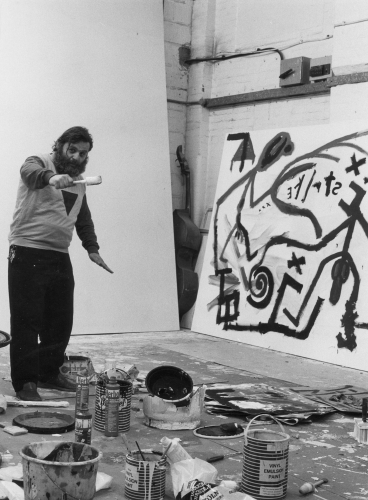 A.R. Penck, the pseudonym of Ralf Winkler, was born in Dresden in 1939. Like Arp, A.R. Penck lived in a time of unrest in Europe. In 1945, he witnessed the firebombing of Dresden, an experience that impacted the course and development of his life and art. As a young man, A.R. Penck was rejected by the academies in East Germany for his political views but continued his career as a self-taught artist. His art was banned from public exhibition in East Germany but was smuggled to the west with the help of Georg Baselitz, Jörg Immendorff, and Michael Werner. His paintings caused a sensation. His first solo museum exhibition occurred at Museum Haus Lange, Krefeld in 1971. He participated in Documenta 5 in 1972. He was awarded the prestigious Will Grohmann Prize of the Academy of Arts in West Berlin in 1975. His success led to further persecution from the East German government. His studio was torn apart in 1975. Eventually his citizenship in East Germany was revoked, and he emigrated to the West in 1980. A.R. Penck was interested in analyzing systems of power in his work, and the human figure is shown prominently in his work as a symbol. When asked by John Yau in 1996 to explain the difference of structural power in the West versus the East, A.R. Penck says, “I am interested in structures and change, not one or the other, but both. Some people believe in systems, but they are blind about the facts. I am interested in movement, rather than something static. That’s what I have been looking at all these years, movement.” 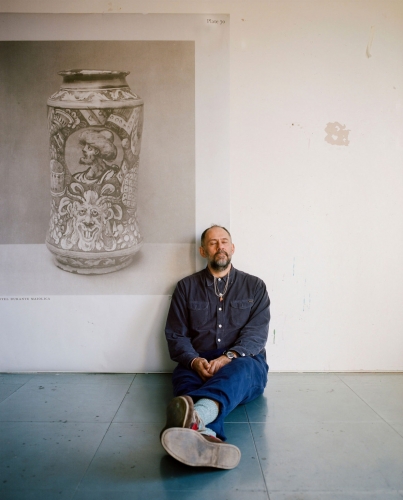 Enrico David was born in Ancona, Italy in 1966. Discussing these recent works, David states, “I draw in the hope of illustrating the functioning of this time, and how I function within it.” Unlike Arp who ends with the human figure, David starts with the human figure. From there, artistic innovation takes over. The figures are subject to growths and protrusions; they are encapsulated in undistinguishable forms. Like Arp, sensuality is at play. Drawing on colors and figures of the Weimar artists of the early 20th century, these works draw from the early 20th century history of Berlin.

Installation view: Italian Pavilion at the 57th edition of the Venice Biennale, 2019

“Art is fruit growing out of man like the fruit out of a plant like the child out of the mother. While the fruit of the plant grows independent forms and never resembles a balloon or a president in a cutaway suit the artistic fruit of man shows for the most part a ridiculous resemblance to the appearance of other things. Reason tells man to stand above nature and to be the measure of all things.” 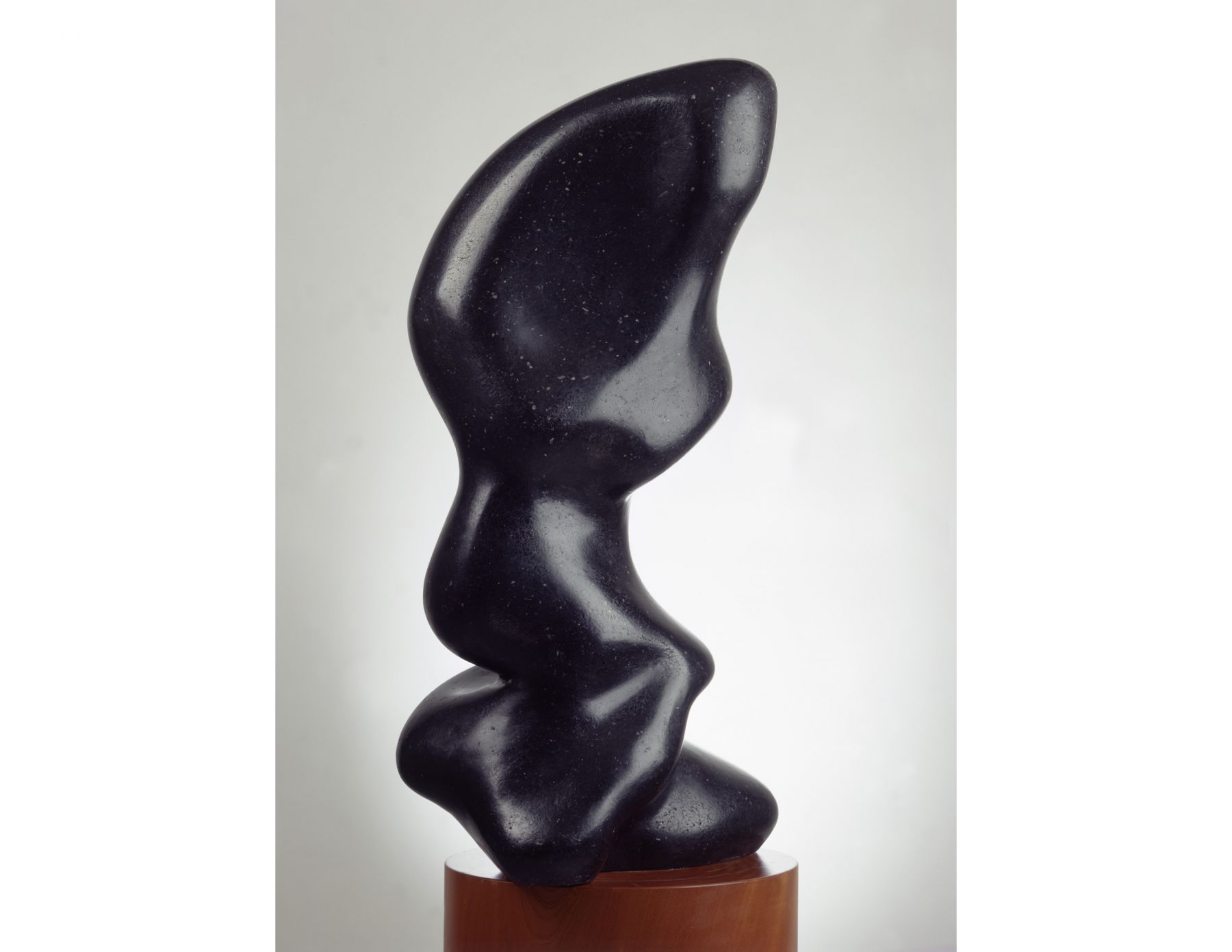 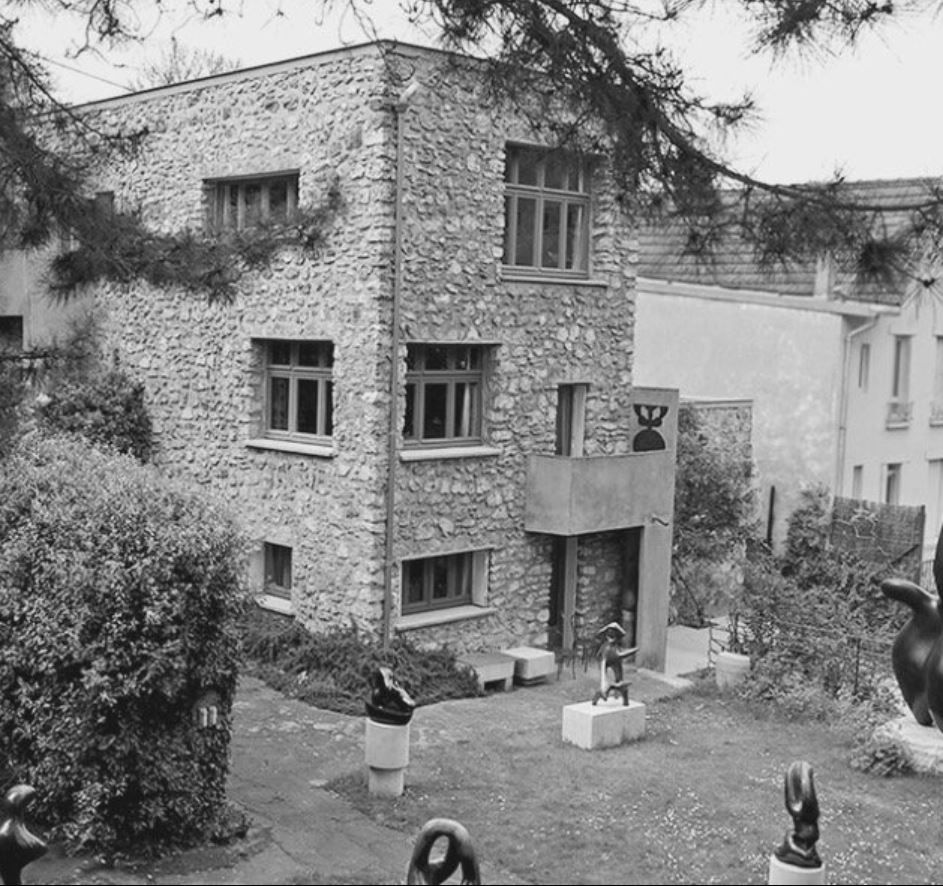 In 1926, Jean Arp and Sophie Taeuber-Arp moved to Paris, where Arp’s experimentation with Dada led him to Surrealism. He participated in several Surrealist exhibitions including the landmark Surrealist Exhibition “Exposition Internationale de Surréalisme” at the Galérie Beaux-Arts in 1938. Shown alongside artists Salvador Dali, Man Ray, Max Ernst, Andre Masson as well as many others, Arp’s work was decidedly more abstract. In a lecture at the Nasher in 2018, Lewis Kachur, Professor of Art History at Kean University, explains the exhibition and Arp’s distinctive contribution to it, “It may be considered the most important exhibitions of the first half of the 20th century, and, as such, [it was] widely photographed and written about in the international press. The right wing French nationalist press labeled the show as disturbingly non-French because of [its inclusion of] so many foreign-born artists, while the communist press considered it a cop-out and too dream-obsessed rather than social or political. They missed what Arp was doing here. In his group of works, [there was] a subtle, yet distinct, politicized response to the widespread politicization of that moment.” Arp, an artist of both French and German descent, having already lived through World War I, seems uniquely positioned to respond to this moment right before World War II. He does so by calling on the peaceable principals of Dada, specifically nature and chance, and applying it to his abstracted work. 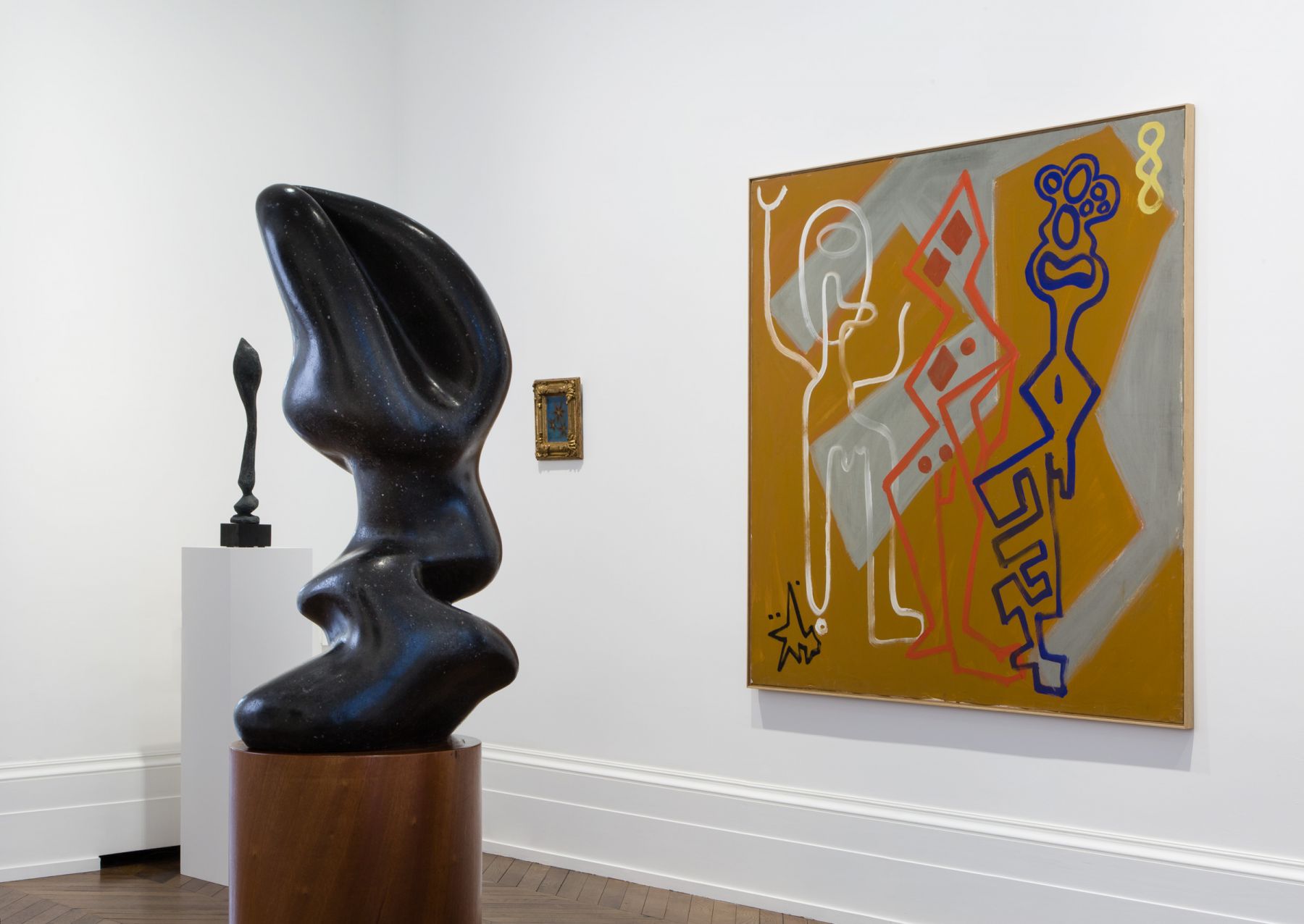 Alfred H. Barr, Jr, founding director of the Museum of Modern Art in New York, proclaimed Jean Arp “a one-man laboratory for the discovery of a new form.” The biomorphic “Pistil”, named after the female reproductive part of a flower, is at once sensual and primal. This unique work was made from cast cement in 1950 for a friend of the artist and fellow Dadaist, Georges Hugnet.

“I draw in the hope of illustrating the functioning of this time, and how I function within it.” 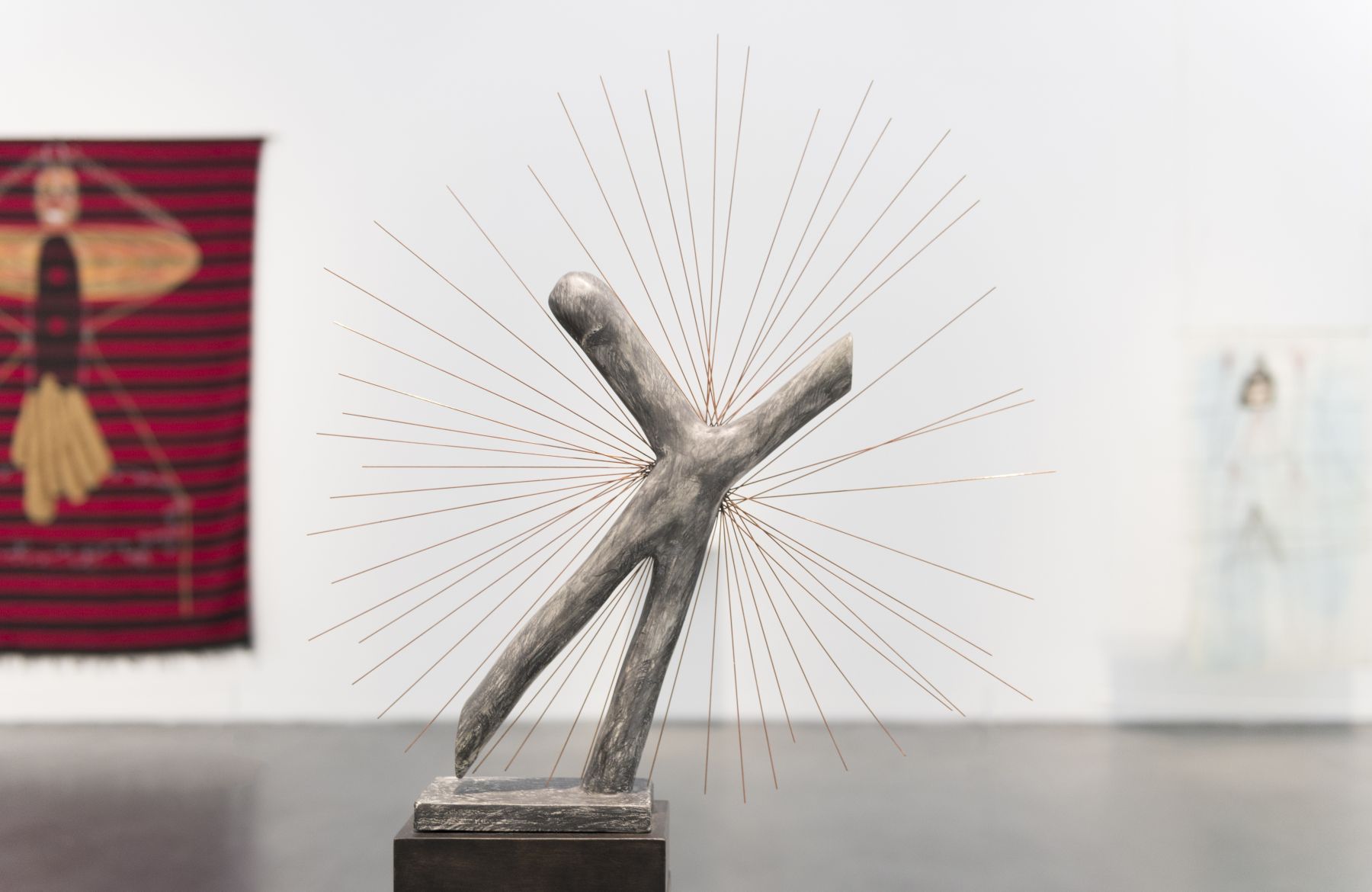 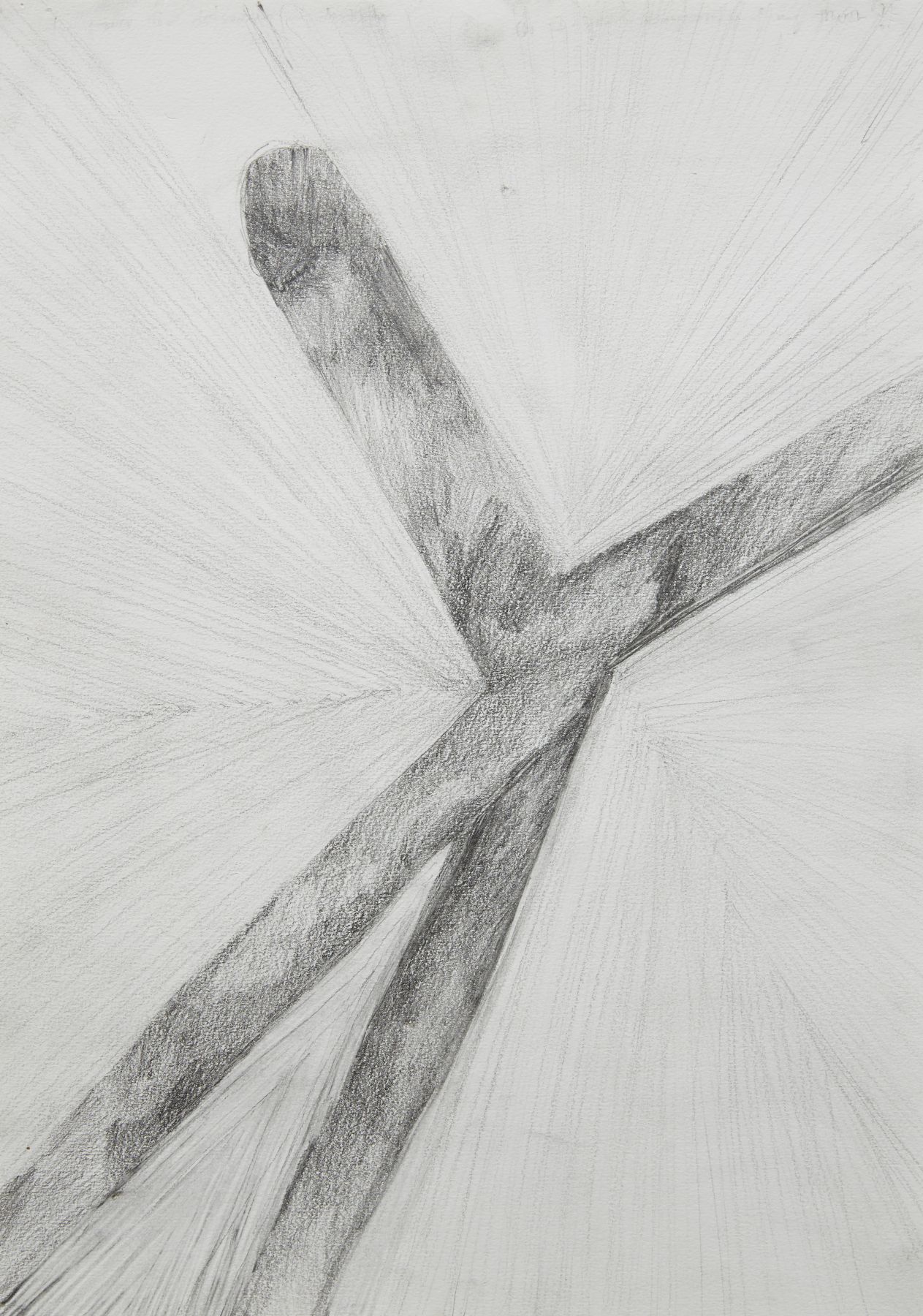 Enrico David began working with cast jesmonite in 2014 and has continued to use this unconventional material for his sculptures to this day. “They have a very particular relationship to drawing for me,” the artist explained recently in an interview with Stéphan Aquin, chief curator of the Smithsonian’s Hirshhorn Museum and Sculpture Garden. “They’re white, but then they’re covered; I put this slight layer of graphite on where I want the drawing to come across -- to emerge -- which then brings [the sculptures] back to some form of drawing.”

The artist describes these works as “appearing to be ridden with incompleteness: not fully formed — perhaps in order to narrow down the possibility of them being chanced upon by peril, or so burdened with detail that peril itself might just be put off and look elsewhere: displaced cavities, exposed networks of nerves, limbs, eyelashes, sculptural mass made lighter in places by subtraction. In the case of these sculptures this passage can be conceived as being simultaneously delicate and brutal, accommodating and defensive. Between these conditions there is simply a surge in which visibilities are assembled.”

In 2018, the Museum of Contemporary Art in Chicago and the Hirshhorn Museum and Sculpture Garden in Washington, DC organized Enrico David: Gradations of Slow Release, the artist’s first US museum survey. Curated by Michael Darling and featuring sculptures, paintings, textiles and works on paper, the exhibition travelled in 2019 to the Hirshhorn. “Tools and Toys III” was included in this exhibition, as well as in a 2015 exhibition at the Hepworth Wakefield. This is the last available cast of the work.

“ I want to furnish some rooms with fictitious signs, as paintings. These rooms are then given different characters. They are like individuals. They can be loved or hated, desired or done without. Beyond that, they allow for intellectual work, creating space – that arises through these rooms.” 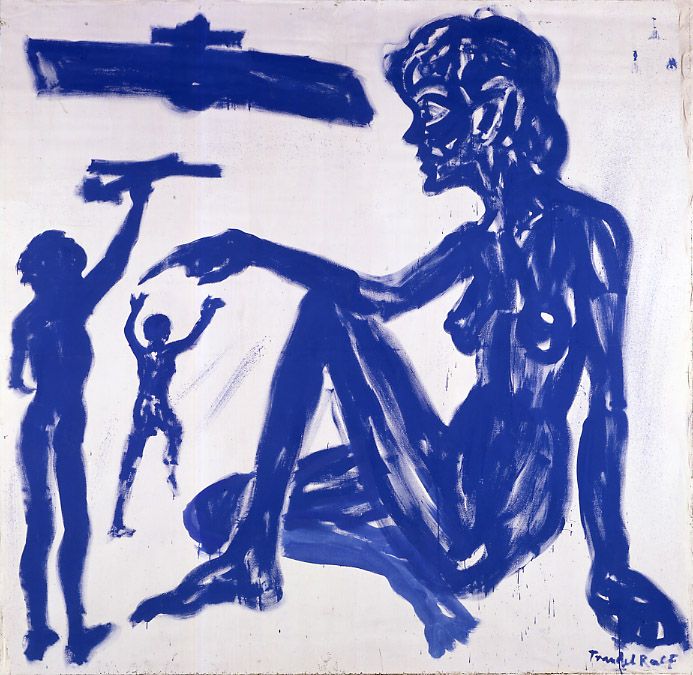 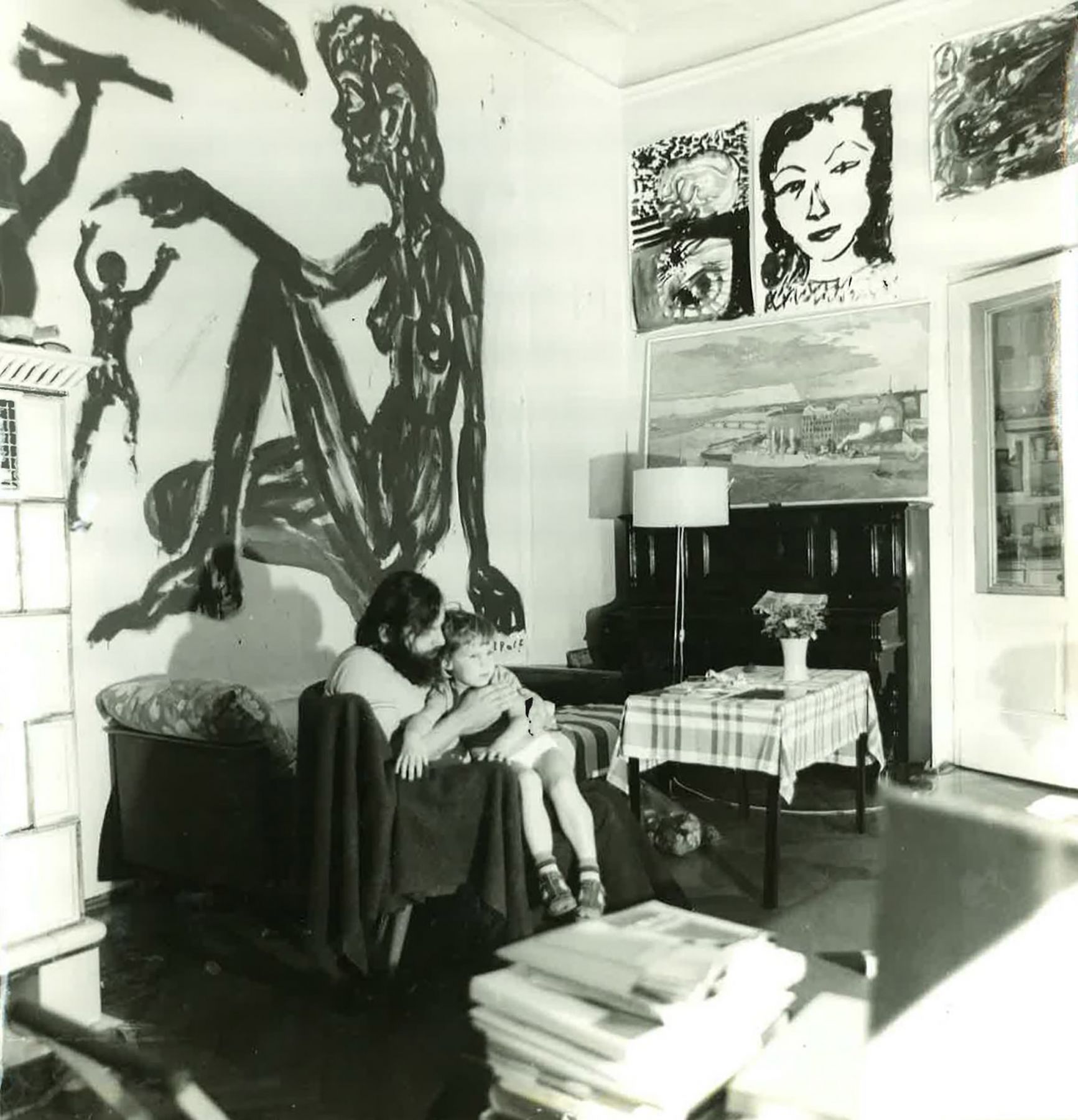 A.R. Penck (1939-2018) painted "Traudel" in 1976, the year his longtime partner Waltraud, a professional ballet dancer, died. Having met her in the mid-sixties, she would become a muse of the artist. Waltraud's death had a great impact on A.R. Penck and was one of the reasons he considered emigrating to the West since his life as an artist was already at a difficult juncture.

Since the early sixties, the East German government was controlling A.R. Penck's artistic output by barring him from showing his work publicly. And realizing that A.R. Penck was an alias frequently used by the artist, whose real name was Ralf Winkler, the STASI became aware of his increasing presence in the West, which led to further observation and limitation of his social circle at home in Dresden. After years of trying, A.R. Penck emigrated from East to West Berlin in 1980. 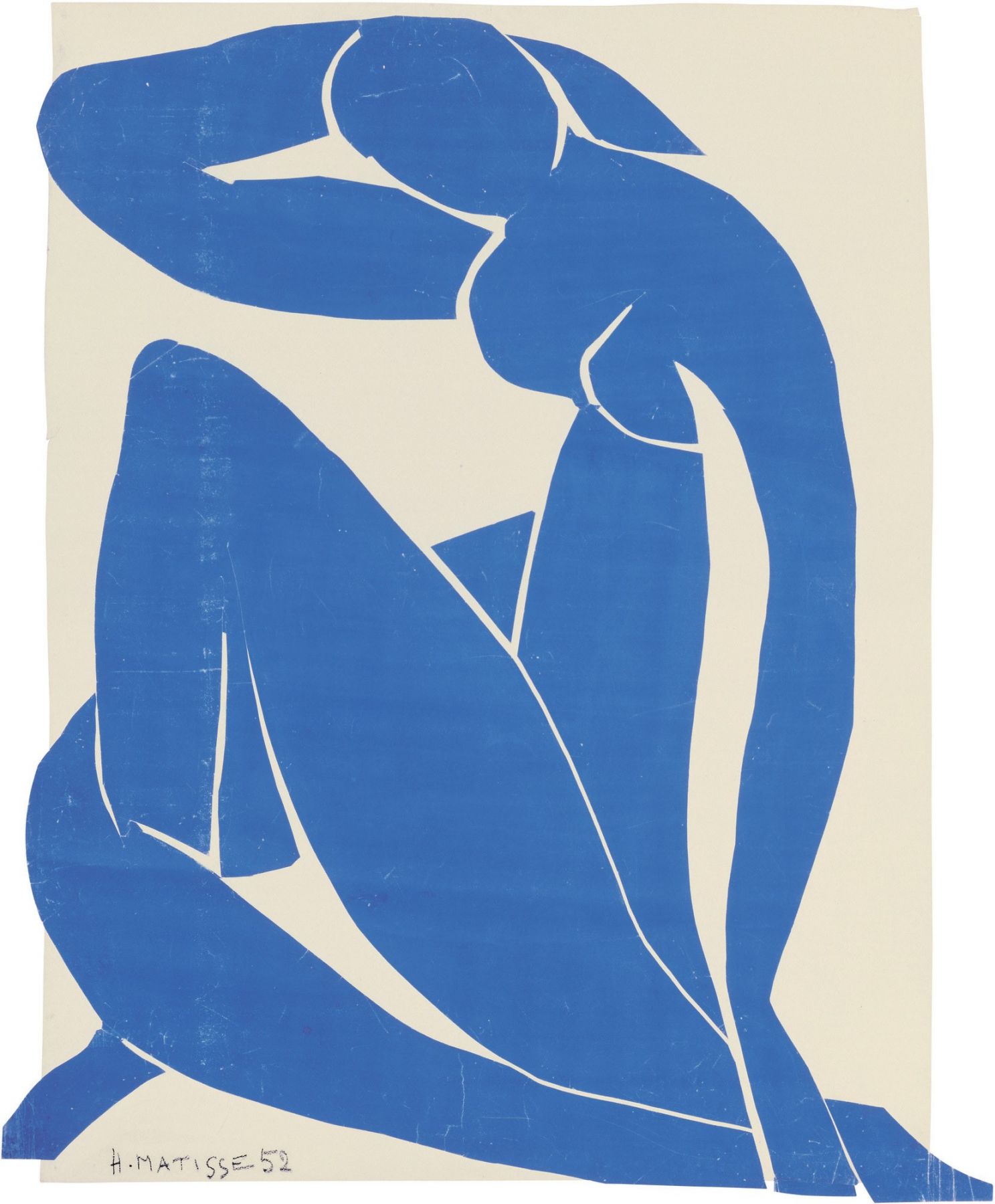 The palette of bright blues against the white cloth and the figure's recumbent pose recalls Matisse's famous "Nu bleu" lithograph series from 1952, which could further be seen as a nod to Waltraud's profession as a dancer and her suffering from a fatal illness, which Matisse was facing at the time he created this late work.

Like a mother, she guards two small children playing with a toy plane, while in the background we can see a plane in approach heading towards them, possibly a reference to a bombing raid. Dresden, the artist's hometown, was heavily bombed in February of 1945 shortly before the end of the war, when A.R. Penck was just six years old.

The difference in scale of the figures suggests a moment in the past: a childhood memory of loss and destruction, while at the same time showing kids innocently playing war, perhaps unwittingly emulating that bygone reality of the artist's childhood. "Traudel" in repose, with her finger pointing at the event, becomes a gatekeeper of the past as well as a manifestation of the present, a synonym for mother nature and the cycle of life. It is arguably one of the most personal paintings by the artist depicting human vulnerability, and a poetic testament to his love.

Letter to Valentine Hugo illustrating the sculpture in the writer's garden.

"About the Human Figure" will be on view at Michael Werner Gallery, London through 4 September.

Overview of the 2019 exhibition, "The Nature of Arp" at The Nasher Sculpture Center, Dallas.