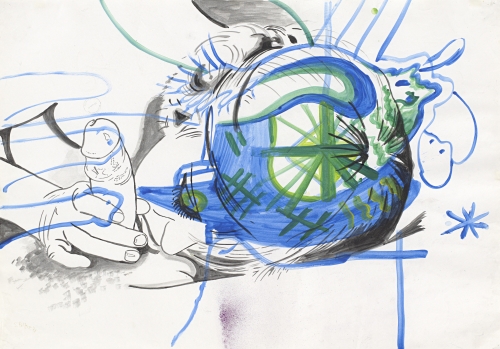 Typically defined as an exaggerated physical condition of enlargement or swelling, tumescence here describes a feeling in painting. Featured are dense and exuberant paintings that largely discard conventional notions of formal restraint and classical refinement, in favor of a tactile and often unapologetic sexual exploration of painted imagery.

Several early works by Sigmar Polke set the tone for Tumescence. A group of drawings from 1960s and two important paintings from the 1970s apply the artist’s seemingly offhand manner to very different ends, resulting in a darkly erotic psychedelia. This joyfully caustic atmosphere is echoed in the works of Peter Saul. His maxim, “Not to be shocking means to agree to be furniture” applies as well to Peter Doig’s works of the 1980s and 2000s, which form a kind of travelogue, the protagonists of which gleefully engage in all manner of bad behavior. A ‘bad trip’ or painterly psychosis of a different sort is depicted in the paintings of Michael Williams, whose unconventional painterly techniques and vocabulary of free-association push the boundaries of what is strange and familiar.

Tumescence, organized by Parinaz Mogadassi, opens at Michael Werner Gallery in New York 5 September and remains on view through 1 November. Gallery hours are Monday through Saturday, 10AM to 6PM. For more information please email press@michaelwerner.com.