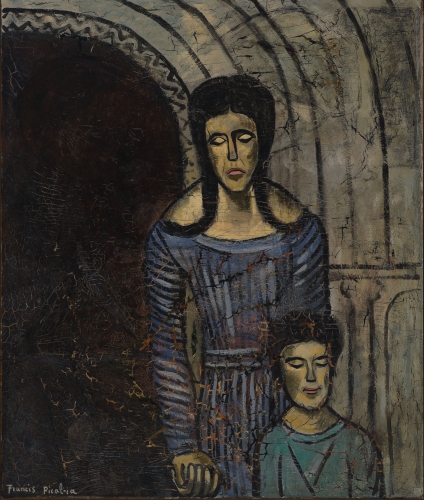 Michael Werner gallery is pleased to present an exhibition of late paintings by Francis Picabia (1879-1953). The exhibition will focus on the mid-1930s through the 1940s and beyond, a time when Picabia experimented not only with a range of imagery but with the methods and materials of painting itself. The so-called "kitsch" paintings will be shown alongside the celebrated "transparent" paintings and strange abstractions. This exhibition provides American audiences with the rare opportunity to view a range of works by this seminal 20th century artist.

Francis Picabia befriended Marcel Duchamp in 1910. Whereas his close friend and ally would cease painting soon after this time, Picabia continued to paint with greater and greater levels of experimentation. While deeply involved with André Breton, Jean Cocteau and other key other artists, writers and thinkers of that time, Picabia remained fiercely independent, moving through cubist abstraction and Dada toward his own form of Surrealism in the 1920s. The 'transparent'paintings which emerged in the 1930s were derived from photographic representations of Roman sculpture, Renaissance painting, and a broad range of popular and art historical imagery. The paintings of this time also show Picabia's interest in experimenting with the medium of paint itself, employing various mixtures of oils and glazes to produce faux antique and craquelure surfaces.

Picabia would reinvent himself yet again in the mid-1930s and into the following decade, creating the so called "kitsch" paintings. Derived from photographs of Hollywood stars and images found in "girlie" mags of the times, the "kitsch" paintings again demonstrate Picabia's willful disregard of convention in painting. For decades these works were virtually ignored by critics and art theorists, who deemed the works amateurish or insincere. The enormous impact these works had on subsequent generations of artists is only now being considered.

Throughout his long and varied career, Picabia continually reinterpreted the role and meaning of painting. His endless experimentation with styles and methods of painting defied easy categorization, then as now. Picabia's richly diverse and confounding oeuvre is marked as well by fluid movement between figurative representation and abstraction, especially in the 1940s. While this caused consternation among critics during his lifetime, it makes Picabia a fresh source of ideas and inspiration for artists working today. Francis Picabia: Late Paintings will present the abstract and figurative works alongside one another, further highlighting the artist's unconventional practice.

Francis Picabia: Late Paintings is on view from 16 November 2011 through 14 January 2012. Gallery hours are Monday through Saturday from 10AM to 6PM. The exhibition is accompanied by a catalogue. Please contact press@michaelwerner.com for more information.