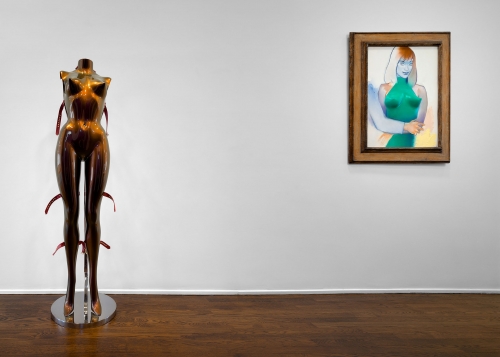 Michael Werner Gallery, New York is pleased to present an historical survey exhibition of works by Allen Jones. Organized by Sir Norman Rosenthal, the exhibition includes paintings and sculptures from the 1960s to the present day and is the first comprehensive showing in New York of this celebrated and controversial British artist. This special exhibition of works by Allen Jones is possible thanks to loans from major public institutions and private collections.

Born in 1937 in Southampton, United Kingdom, Allen Jones became a student of painting during a turbulent period of change in British art. He studied at Hornsey College of Art for four years before enrolling at the Royal College of Art, where his fellow students included Peter Phillips, David Hockney and R.B. Kitaj. Jones and his contemporaries were in the vanguard of a new generation of artists who vigorously questioned the authority of classical English painting. These young artists sought a decisive break with tradition yet were skeptical of modernism’s linear trend toward reductive abstraction. Jones rejected the notion that this art historical narrative signaled the end of figuration. He embraced the European tradition of pictorial illusionism while employing decidedly low or “pop” imagery. Jones’s first mature works – cartoonish depictions of city buses, rendered in bright colors on shaped panels – became iconic images of British pop and also hinted at the conflation of painterly space and sculptural form that would characterize much of his later work.

As his style matured during the mid-1960s, Jones increasingly sought inspiration in “non-art” sources such as illustrations from fetish magazines, advertising and comic strips. A remarkably prescient source revealed itself unexpectedly in 1965, during a trip across America: Jones happened upon a slot machine embedded within the form of a Vegas showgirl, a commercial variant of figurative sculpture which struck Jones for its sexual presence and intensely non-art condition. In this uncanny object Jones foresaw myriad possibilities for a thoroughly contemporary take on figurative representation. This encounter informed the controversial “furniture” pieces of 1969, which brought Jones great fame and equal amounts of scorn.

The primary motif in Jones's paintings and sculptures since the late 1960s is an idealized figure, usually - though not exclusively - female. The figures are highly stylized in their dress and demeanor, and are typically positioned within a compositional framework which mimics a proscenium. The inherent theatricality of this formal conceit encourages the viewer to attribute a broad range of meaning and possibility to the depicted figure, while allowing the artist free play with pictorial invention. The exhibition at Michael Werner brings together a selection of key works from throughout Jones’ distinguished career to highlight his daring and sophisticated reimagining of figurative imagery.

Since 1963 Jones has exhibited his work in solo and group exhibitions internationally. In 2014 the Royal Academy of London presented a large-scale retrospective of Jones’s work in all media. Jones was elected a full member of the Academy in 1986 and has been a trustee of the British Museum since 1990. In addition to exhibiting extensively in galleries and museum, Jones has completed numerous large-scale public commissions, many of which are found throughout the UK. Works by Jones are held in museum collections worldwide, notably Tate, London; Museum Ludwig, Cologne; and the Hirshhorn Museum in Washington DC.

Allen Jones: A Retrospective opens 31 March and is on view through 28 May. The exhibition will be accompanied by a full-color catalogue with a text by Sir Norman Rosenthal. Gallery hours are Monday through Saturday, 10AM to 6PM. For more information please contact the gallery at press@michaelwerner.com.